Digital Technology in the Sports Industry

We use technology in pretty much everything now, we’ve gone from horse and cart to electric supercars, we’ve gone from toasting our bread over an open flame to electric toasters that will toast your bread to the perfect colour you want it. We’ve gone from having to cut our grass with sickles to RIDE ON LAWNMOWERS! Crazy. Sport has also come a long way in terms of its use of technology. That’s what we’re here to discuss today.

The last time I talked about this subject, I spoke at length about technology that companies use to help make training more efficient with better long term results and I also touched on some of the technology that some of the best sportsbooks use in their apps for in play betting and live streaming certain games from certain leagues etc. But this time, I’d like to talk more about the way we use tech to help sports, now that a lot of sports are played more on the bleeding edge at crazy speeds.

One of the current systems in use is VAR, or the Video Assistant Referee, it is used in many different formats in many different sports, the specific version we’re going to be looking at today is the one used in football, or soccer. So, what is it used for and how does it work? Well, first things first, what is VAR? The VAR is a separate panel of referees from the on pitch referees, they’re off site, for the Premier League they’re based in Stockley Park in West London. The VARs will watch games, they’ll look for errors, potential penalties, monitor offsides and check for potential red cards and then report to the on field referee who will be wearing an earpiece, so how does it work?

Read :  Is There A Secret To Winning A Jackpot In Slots?

As previously mentioned VAR can be used to check a lot of things. When I mentioned it being used to check errors, what I meant by that is whether a referees decision was a “clear and obvious error”, if the VARs determine the referee to have made a clear mistake, for example giving a penalty or a red card for a blatant dive with no contact but perhaps from the referees angle it looks like there is heavy contact, the referee will be told in his earpiece that he should take another look, at which point he will be directed to the pitchside monitor where a replay featuring multiple angles will be available for the referee to look at, that way they can choose to overturn their decision if they would like to. However in severe cases the VAR can overturn the referees decision for them.

VAR will also be used to check whether EVERY GOAL that is scored was onside OR featured a hand ball in the build up, in previous seasons the lines they used were thin and caused plenty of problems with marginal offsides, coming down to literal millimeters, however moving on from this season they’re using thicker lines so offsides which are closer than the naked eye can see shouldn’t be an occurring problem, I really hope this is the case as some decisions last season were outrageous! See pic below… 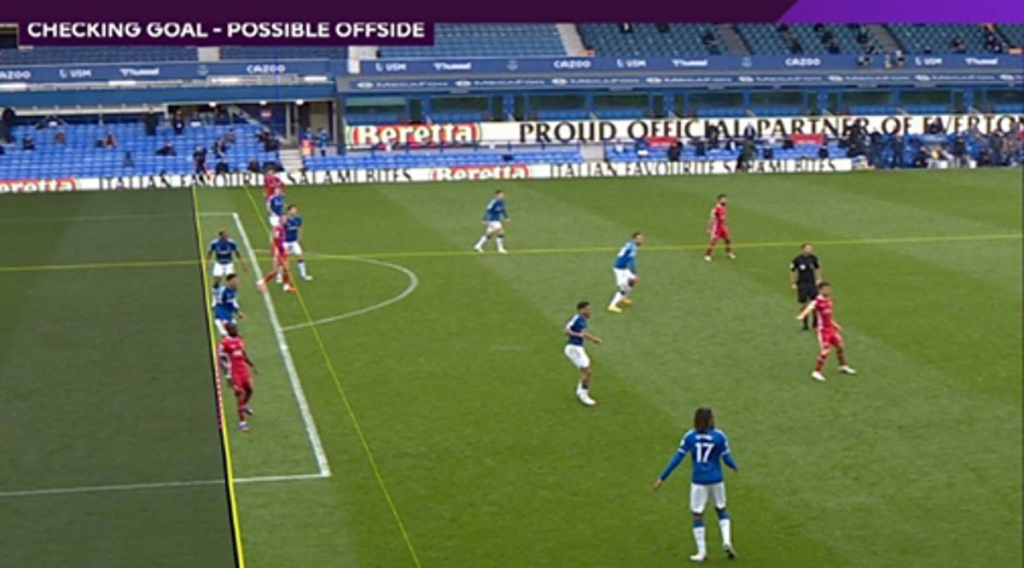 Sadio Mane somehow ruled offside in build up to a Jordan Henderson goal with a part of his body that can’t legally score a goal against Everton. Source: SportBible

Another system that is used in Football is Goal Line Technology, a system used to determine whether a ball has completely crossed the line. Given some of the goals given or not given in the past that likely shouldn’t have been, Goal Line Technology was honestly a long time coming. The system is pretty awesome, using an array of cameras at various locations around the stadium, as well as sensors around the goals themselves. If the ball is deemed to have completely crossed the line, the on field referee will receive a notification on their watch. Meaning, if players argue that a goal has been scored and the referee has NOT received a notification, they can safely say one hasn’t. However, it isn’t without its flaws and sometimes it can go wrong, but with a relatively high success rate it’s definitely worth it.

That about does it for this one, if I’m being honest, I’m 100% for technology in sport. I think the referees and officials in general need all the help they can get and when used correctly like in cricket, tennis and rugby, it can be an incredibly useful tool. However, in football in particular the use hasn’t been smooth, the referees using the technology haven’t been great and in all honesty it has been a mess, though we are getting there slowly but surely. Here’s hoping we can fix it moving forward! What about you, do you agree? Do you want VAR gone? Let us know!

HOW TO WRITE A MARKETING REPORT?