A sprite is a static bitmap image that the player always sees from the same angle. In other words, it’s just a picture. In the 90s, sprites were used everywhere: in 2D platformers, strategy games, the first 3D shooters, racing, and football simulators.

If you have a computer game on the monitor in front of you, then what do you see in front of you? The graphical shell of this project has a variety of textures made up of tiny pixels. Therefore, if you plan to create a mobile game, you must work a lot with graphics.

Now sprites display extras in the background, vegetation, and distant objects. Sprites are also used to make the most notable effects, such as explosions or a particle system. So yes, sparks, snowflakes, game backgrounds, and falling raindrops in modern games are sprites.

An example of sprites for games is:

This means that you will not need to draw every object in the game and every phase of its movement – you will already have all this ready-made and make game development much easier.

On the Internet, you can find hundreds of thousands of sprites for heroes, game levels, weapons, armor, etc. The advantage of free sprites is that there are a lot of them, and they are freely available. But it is better to use outsourcing services if you want to develop your games and create a project to launch on different platforms. Why? Well, it will look strange if sprites from the front pages of Pinterest or other popular resources are noticed in your game.

In order not to search among hundreds of free sprites, most developers turn to outsourcing companies for help. This not only saves the budget, but also allows you to offload the main design team and launch a project with a better product.

For mobile games to be explosive and stunning, they must have a unique and catchy visual that you can’t achieve with free utilities and tools. The ideal sprite should have a clear and memorable silhouette. To achieve this effect, artists draw dozens of sketches until they reach the perfect version. They usually draw on paper, because it’s faster.

Work begins with simple shapes: squares, circles, and triangles. Artists try to use their own set of primitives for each character so that its silhouette differs from other sprites. First, the artists make primary black and white sketches. They can be used to evaluate the shape and the main features of a character or object. 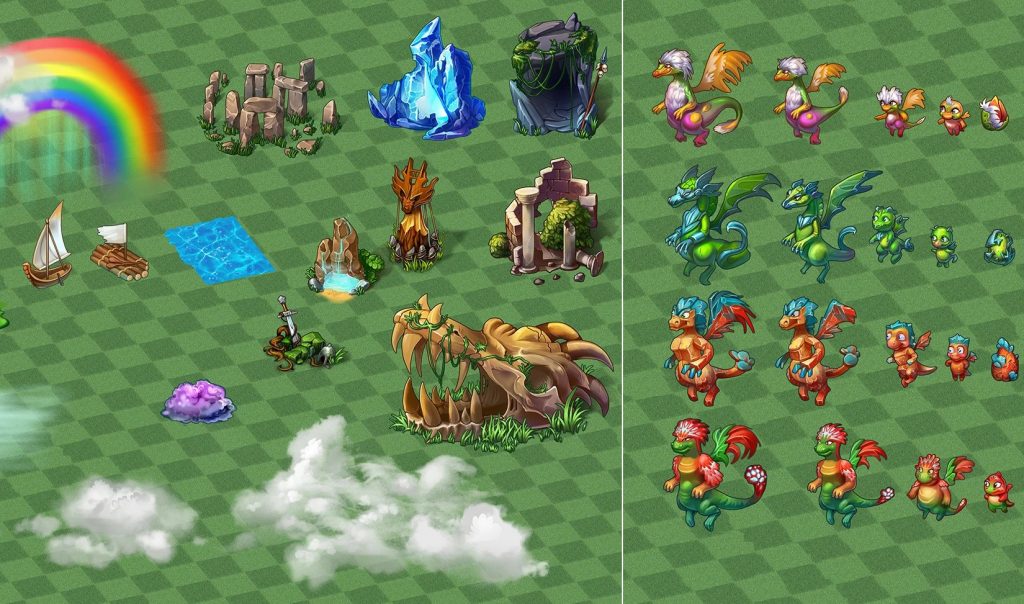 Sprites are used in both 2D and 3D games. In 3D, they can be displayed in a 3D scene (then it is noticeable that the lighting and angle do not affect the sprite, or it will change abruptly), as a texture application, or in the on-screen interface. Often it is the first option called a sprite in the context of three-dimensional games.

Using 3D and advanced graphics is not necessary to create a profitable game. Yes, three-dimensionality itself is unnecessary – half of the top games work in 2D. Also, in 2D, it’s easier to make addictive game mechanics and balance them for the players.

Read :  How To Get Into Competitive Gaming

In 2D games, it’s best to use sprites: two-dimensional flat images. They are cheaper to manufacture, do not load the device, and always depict game levels at the best angle.

To create top down sprites, 2D artists don’t pick random colors from the 65 million available. Instead, they find bright photos and, with the help of special services, “pull” the most used shades from them. Then they either use the resulting palette or overlay it with another color to reduce the palette to one gamut. This technique is suitable for drawing environments and objects so that all elements match each other in color.

Artists usually draw sprites for game art at a resolution much more significant than what will be used in the game. This makes it easier for them to detail the drawing and add details that will look good on a small scale.