Internet of Things in Business: What it’s All About?

The Internet of Things is a very rapidly developing area that is increasingly being introduced into our lives. All this is due to one important feature of the IoT – global connectivity between devices. Connect with Proofid.com to discover more about the Internet of Things and its applicability in various industries.

What is the Internet of Things?

In simple terms, the Internet of Things is a set of interconnected devices with built-in sensors and special software for exchanging data with other devices, analyzing this data, and performing certain actions with pre-made scripts. Let’s dive deeper at every part of the Internet of Things.

Gathering information is the cornerstone of the Internet of Things since further operations are impossible without any information. 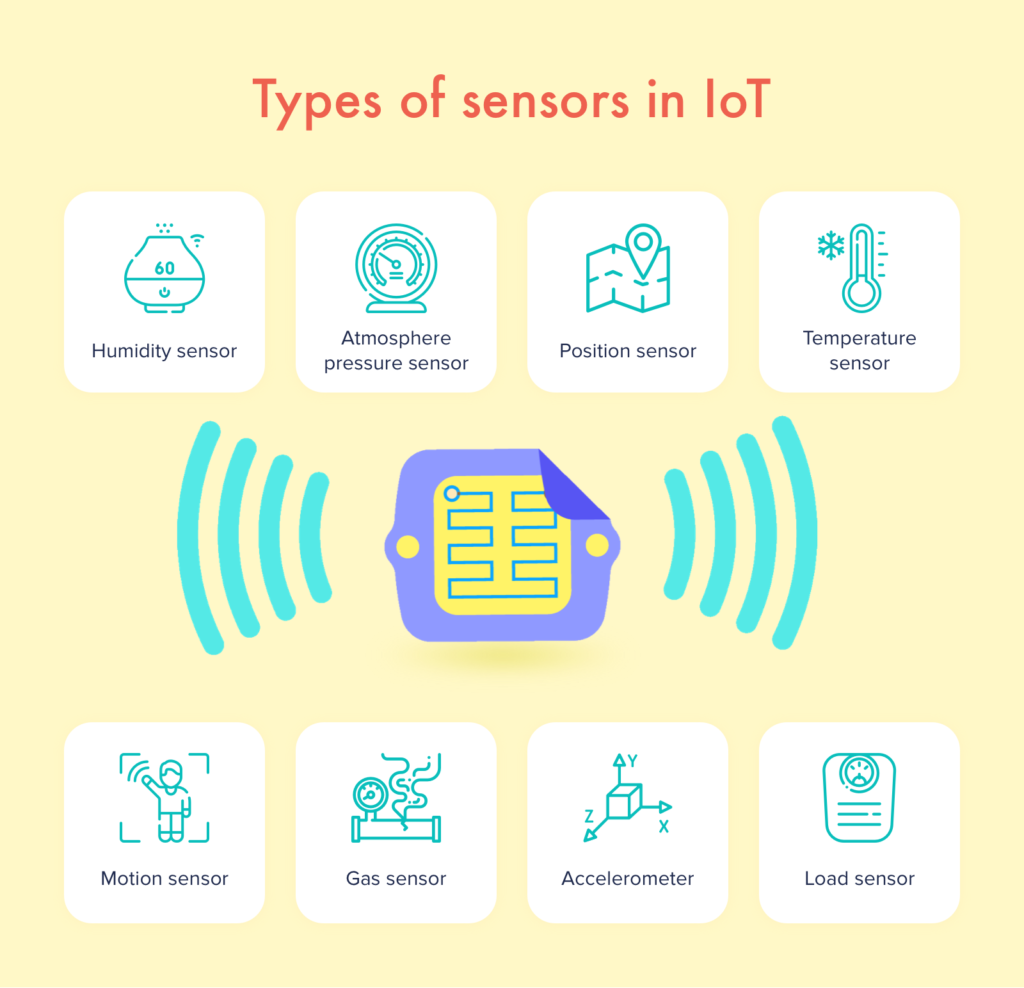 For instance , in agriculture, sensors are used to determine the dryness of the soil. When this indicator falls below the set mark, the sensors record this and send a signal to the automatic irrigation system. This example significantly automates the overall farming process.

The data is collected and sent to the device, but what to do with these huge blocks of data? How to use it like this? Before you can use the data, you need to analyze it and separate the unnecessary and useless information blocks.

Read :  Major challenges of a finance manager in a business 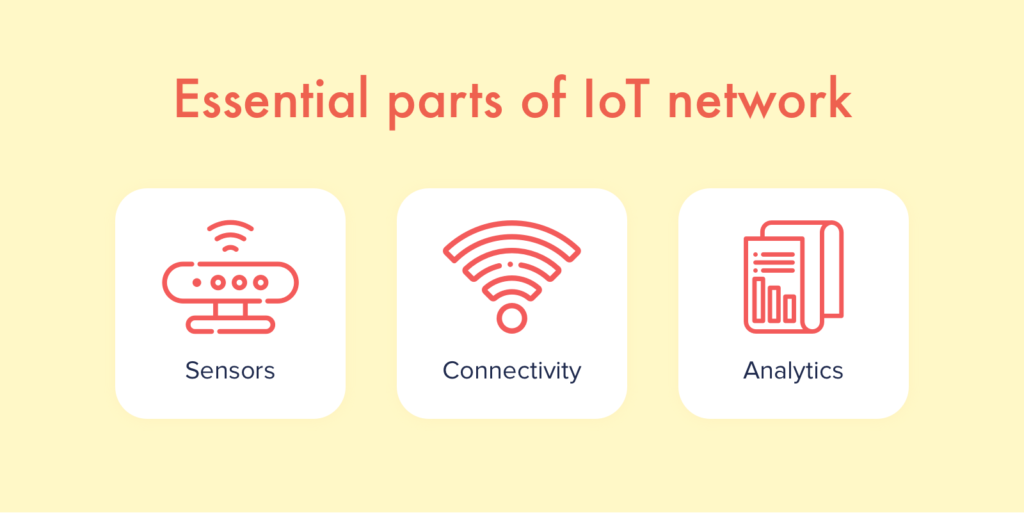 The IoT can do such complex operations in real-time. Gathered data greatly facilitates the business decision-making process and choosing the right development path.

Which Industries Benefit from Utilizing the IoT

In such a vital industry as medicine, the Internet of Things has already found its place. Primarily in the form of various devices that patients wear and transmit data about their well-being directly to their attending physicians. Various data can be transmitted to the doctor, for example, pulse weight, etc. If some indexes are outside the normal range, the device on the patient’s arm will send a signal to the doctor’s device, and the physician will receive a notification. 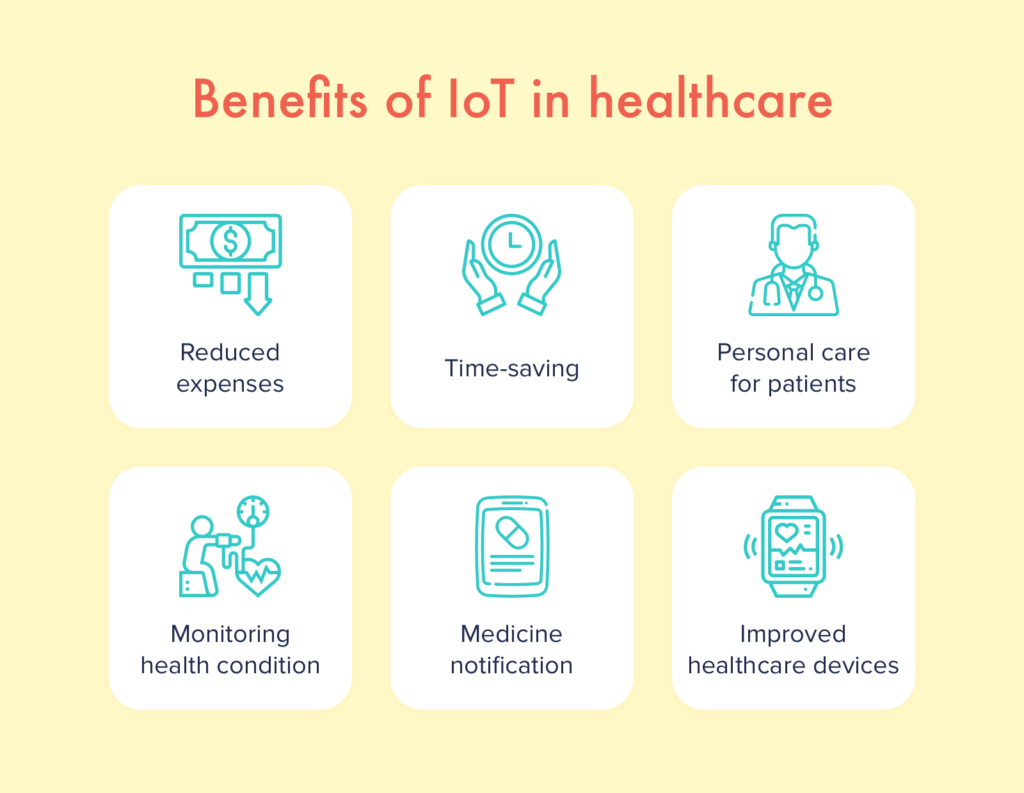 Another example of IoT in healthcare is an automatic drug dispenser that sorts the tablets and dispenses the patient’s necessary drugs based on the prescribed intake schedule. At the same time, the device also has manual access to medications if the patient needs such a feature.

The use cases for the IoT in the industry are endless, thanks to the automation capabilities of most workflows.

One of the most striking examples is systems for checking the technical condition of the equipment. If the plant has a lot of equipment, then human resources verification can be time-consuming. With the Internet of Things, all machines will be packed with sensors to analyze the equipment’s condition in real-time. 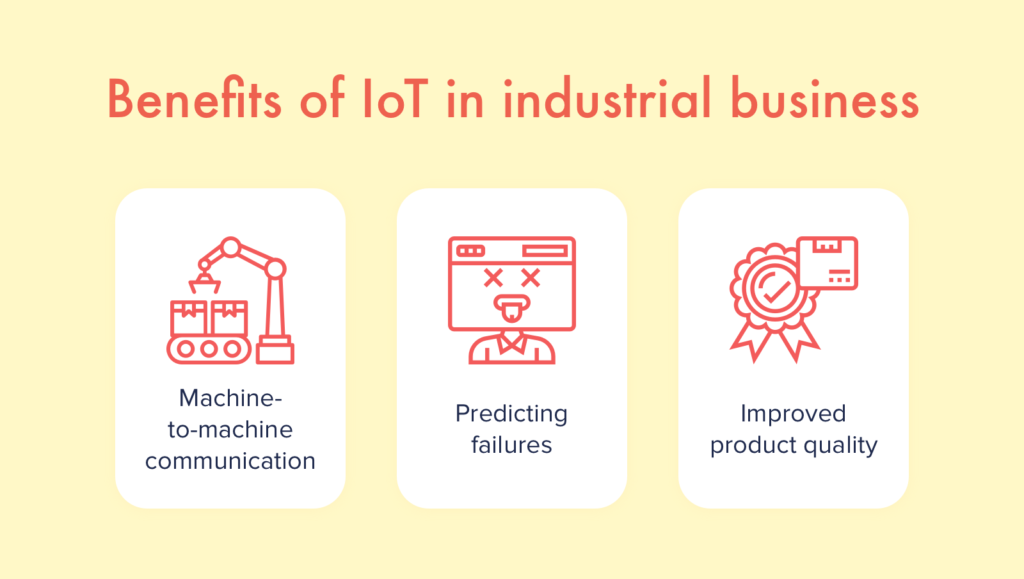 If a malfunction is detected, workers will receive information immediately, and they will not need to look for specific equipment that does not work as planned. The speed of detection and repair increases significantly, thanks to the detailed statistics provided by the Internet of Things’ analytics.

Read :  5 Great Tech Services to Use Within Your Business

Farming is always associated with huge fields for processing and work in hard-to-reach places. And it’s the perfect place to use the Internet of Things. Many farmers utilize drones to their full extent, which does an excellent job of fertilizing the soil, watering, and other tasks. One of the significant advantages is that drones are not limited in any way in their movement. It’s also possible to pre-program the routes along which the drone will fly using the autopilot function. Agricultural automation significantly increases efficiency and reduces costs. 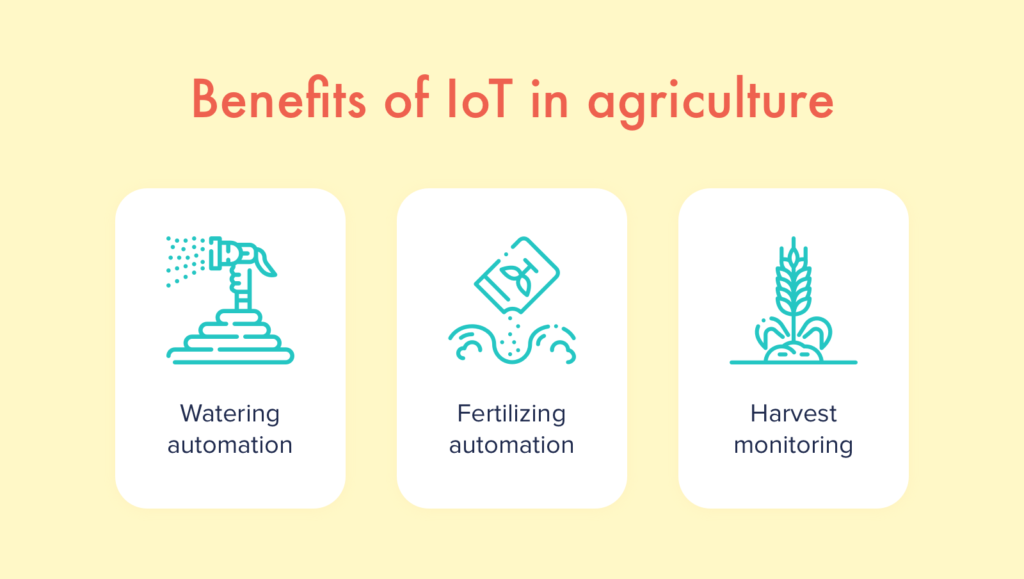 However, although the system is already actively used, it still has its weaknesses, and the supervision of a specialist over the operation of the entire system is mandatory. 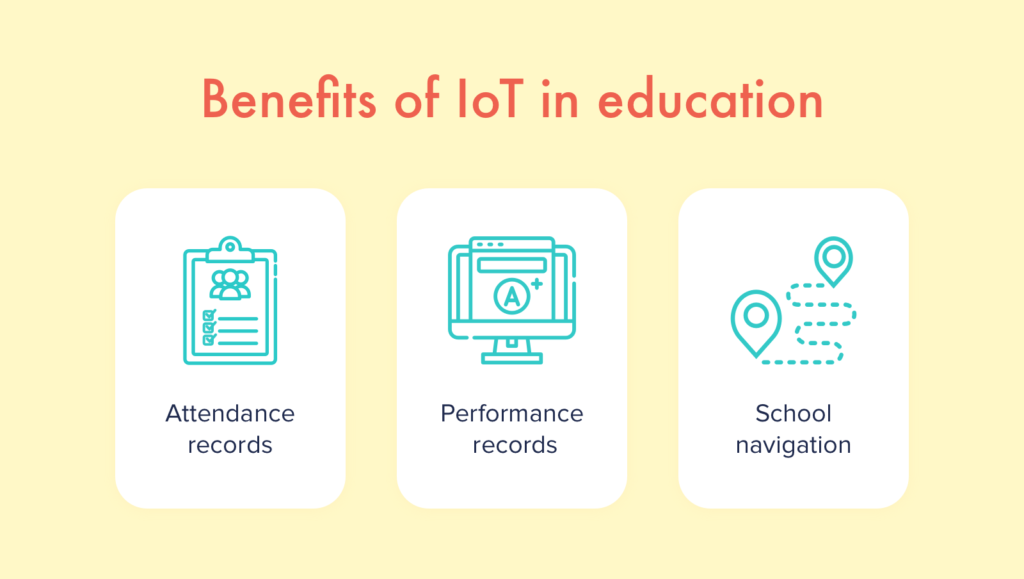 However, not everything is limited to security. The educational process also benefits from the use of the Internet of Things. Thanks to RFID tags, it is easy to track those present in the classroom. Besides, it is also possible to record each student’s progress, which is available for viewing by the students themselves.

Despite the huge number of undeniable benefits, the Internet of Things has certain nuances that should be considered before implementing this technology into your business.

Cisco has already confirmed the security problems of the Internet of Things. The lack of specialized security standards makes the data that the IoT works with very vulnerable. That is why it’s very important to pay attention to the security aspect when implementing the Internet of Things in your business. In order to increase security, it’s recommended to use ready-made IoT solutions from Cisco, Senrio and other trusted companies. 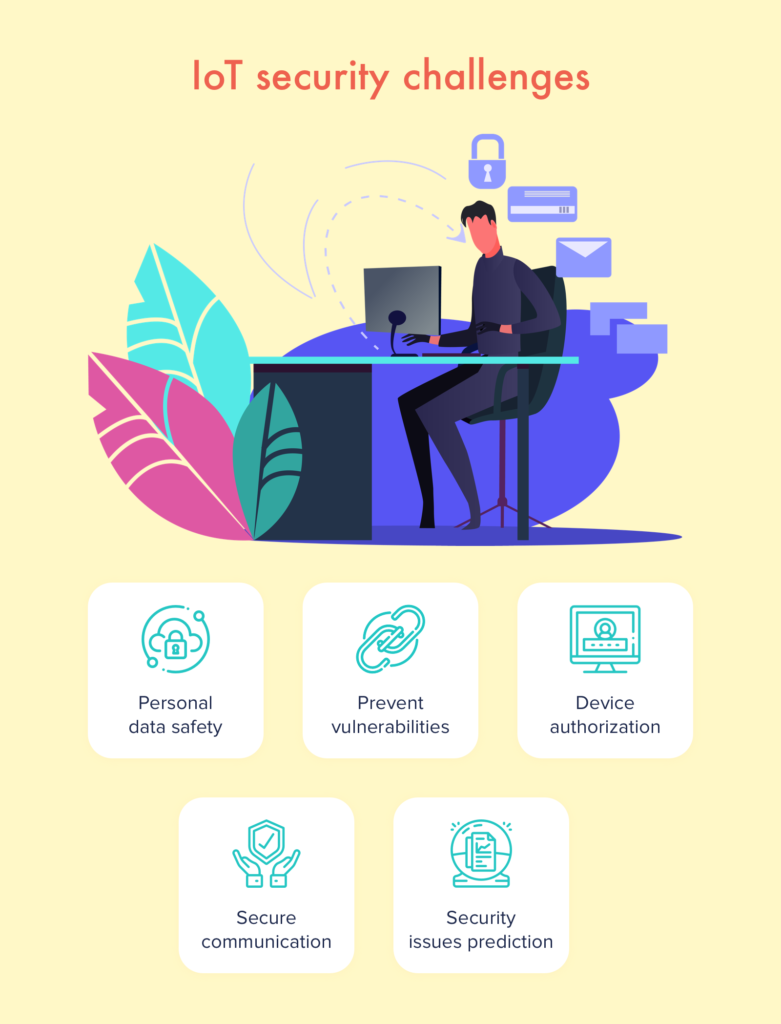 There are also some problems with system integration. A huge variety of devices with different hardware and operating systems may not always work correctly or may not fit each other at all. In order to neutralize this possibility, it is recommended to adhere to equipment from a single manufacturer when implementing the Internet of Things.

Despite the huge number of positive aspects and development prospects that the Internet of Things opens up for companies, some entrepreneurs are still biased towards this technology. Some consider this technology to be something of a fantasy. Also, many entrepreneurs understand that the implementation of the Internet of Things can cause some problems that simply will not have time to be solved and put off the idea of ​​implementation on the back burner.

However, the future of many industries lies behind the Internet of Things. Automation and an increase in the efficiency of work processes drive entrepreneurs to introduce this system. It allows them to open up new horizons in the development of both individual enterprises and industries as a whole.

Vitaly Kuprenko is a technical writer at Cleveroad. It’s a web and mobile app development company in Ukraine. He enjoys telling about tech innovations and digital ways to boost businesses.

Why tech-savvy professionals should pursue a business analytics degree

How to Choose a Warehouse Management System

Should your business have a disaster recovery plan?

6 Benefits of cloud consulting services for your business

Why should businesses focus on CSR in 2022?