How to Integrate Siri into Third Party iOS Apps?

Siri was a dream seen by the legendary innovator, Steve Jobs. The idea was to usher the future of smartphones into a new era by making smartphones “smarter.” Siri was the first artificial intelligence integrated into an iPhone. The app categories with which one could integrate Siri were limited, to begin with, but with time Apple has broadened the categories.

Apple was first opposed to allowing third-party apps into Siri, as the company believes in heavily guarding its users’ privacy. But now slowly but surely, the company has started opening its doors to third-party developers allowing them into their inner sanctum.

Apple has understood that despite being one of the first players in the mobile smart assistant market, it has lost significant ground against competitors like Amazon and Google. The efforts of Apple to integrate Siri into third-party apps are in-line with its policy of making Siri more popular.  Furthermore, you can also hire iOS app developer to customize applications for Apple devices that can use Siri to make the device friendlier and useful.

Apple’s voice-controlled personal assistant Siri was first introduced to the world in 2011 on iPhone 4S. Today Siri is available on a wide range of Apple devices like iPod, iPad, Apple Watch, Airpods, Homepod, and even on the macOS.

The built-in voice-controlled intelligent personal assistant has come of age in the years that followed. Now, Siri is looking to up the ante to provide competition to Google Assistant, Amazon Alexa, and Microsoft Cortana. Siri offers a seamless experience with all the Apple devices and helps you in:

These tasks that Siri can handle are just the tip of the iceberg. With the popularity of Voice Assistants increasing by leaps and bounce, Apple will make Siri more “meatier” by including more functions.

Why integrating SIRI with your app?

You might have this question: why should you even bother integrating Siri into your Mobile App? The first point to notice is that voice is the most natural and fast method of human communication. As long as we can communicate something by saying it, we would not bother to use any other communication mode. Using voice search, the users can quickly perform various tasks like writing emails, notes, and performing multiple functions. It is because they don’t have to waste time typing commands.

Read :  How to Select the Right Apps If You Live in Ohio?

So by integrating Siri into your app, you would be in-effect taking advantage of this natural affection of humans towards the voice. By integrating Siri, you would make the user experience smoother. The users won’t need to type commands. Instead, they could just ask Siri to complete the task.

Understand that typing on the small screen of a mobile device is something that not many people cherish. Hence, by integrating Siri into your app, you would be able to make the customer experience better and improve your customers’ engagement levels with your app.

Using Siri, you would be able to gain access to a much larger customer base as Siri currently supports more than 20 languages, including languages like

The joy of using voice apps is unparalleled, and by integrating Siri, you would outgun those competitors who are not ready to adapt to the changing dynamics of using a smartphone.

Sirikit also allows you to integrate Siri’s suggestions into your device, which helps you in providing very personalized recommendations of various actions as well as commands which the user can execute instantly. For instance, if your user receives a request for a meeting on a particular date and time, then using Siri’s suggestions, Siri will add the meeting on the calendar.

Using Siri shortcuts, your users can explore more possibilities of using your iOS application, enabling your app to deepen the engagement level. By using Siri shortcuts, your users will be able to build a pivotal phrase to execute a particular command. For example, by saying the phrase “wake me in the morning,” the users will be able to set the alarm to 6 a.m. the next day.

Hire iOS app developer who can use  Siri shortcuts with the latest watchOS to integrate similar shortcuts in the Apple Watch making it more user-centric.

Let’s have a look at the benefits of using Sirikit.

Before you proceed with integrating Siri with your app, understand that Siri supports only iOS10 and later versions. We would recommend you to check out the latest updates in iOS10 to know more about its functionalities.

Now let us delve into a few necessary details about integrating Siri into your app. First, we need to know about intents.

What are intents and how to implement them in Siri? 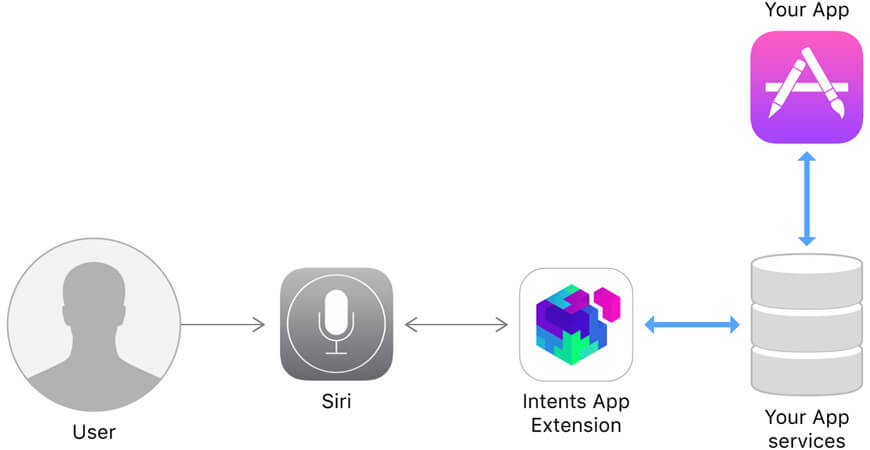 Apple has named the types of user requests as “intents.” Apple groups various intents into “domains” to clear which intents your app will be able to support. Siri changes the intents into app action whenever it receives requests from the users. The App Developers can use the intent framework to create intent app extensions so that they can transform user requests into app-specific actions.

Note that you still have the option of using the default interface. You can also refer to Apple’s developer documentation for a detailed guide on implementing Sirikit.

Generally, in iOS, if two apps are running independently, they cannot interact. It is where Sirikit helps. It allows the apps to communicate with each other through an arrangement known as extensions.

An Intent Extension defines how Siri and a particular iOS app will interact with each other. Intent UI extension will define the view that a user sees. Usually, iPhone Siri apps will have a default view, but it also provides a Custom View.

The app developers can enter information like Title, Description, Parameter Types, and Categories to understand the Intents that the app will accept. The app developers will need to specify the words that will kick-off the requests.

To implement intents first, ensure that Siri is enabled in Apple ID.

One of the most important things to consider while integrating Siri with your app is to see whether Siri is supported on your domain.

What are the pros and cons of using Sirikit in iOS apps?

Sirikit allows the iOS app developers to get into the $18.3 billion voice recognition market.

The developers can custom design the UI with Sirikit.

Sirikit helps make the app simple and reduces the chances of a mishap.

The fact that Sirikit is available for only iOS10 and above reduces the market size for the developers initially.

Sirikit has a limited word database

Be SIRI-ous and integrate SIRI with your app.

Voice-Assistants are the latest rage, and after seeing the success of  voice assistants like Alexa, Google Assistant, and Microsoft Cortana, it is safe to say that they are here to stay. Although late to the game, Apple has finally caught up with its peers by allowing the integration of Siri in third-party apps. Whether you hire iOS app developer or you yourself are an avid programmer, you have a lot to gain by integrating Siri into your app. think of innovative ways to integrate Siri. You will see a definite rise in the engagement level of your app. You can even take the help of expert iPhone app developers to do so.

How to Increase Revenue with Google Ad Manager

How to manage Files in Online and Offline Mode?

How to Create a Loan Lending App in Minimum Budget?

How to keep cryptocurrencies safe?

How to Understand Technical Analysis for Beginners

What App Development Companies Can Do To Grow Your Industry?